Today we attended the Toronto Garlic Festival held at the Evergreen Brickworks:

The Evergreen Brickworks is home to a weekly Farmers’ Market which we visited this morning. Parking at this venue is a challenge due to the sheer number of people who visit the market, but I needed my car this morning to pick up some onions for a friend who is presenting at Soupstock next week. So as not to make the same mistake as this morning, we took advantage of a free shuttle bus that runs from Broadview Subway Station. Because of the Garlic Festival, they have added numerous extra buses to enhance their schedule to having a bus every 10 minutes instead of the normal 30 minutes.

We hopped on the bus at Broadview and in short order arrived at the Garlic Festival. Having bought our tickets in advance, we were able to gain entrance quickly and easily. Tasting tickets were being sold for $2 each and most vendors were offering their products for either one or two tickets which seemed quite reasonable.

Shortly after arriving my wife immediately spotted local celebrities Leah Pinsent and Peter Keleghan who were enjoying the tasty garlicky treats. I did not go all paparazzi on them, so I have no photographs to show.

Our first tasting was at Babi & Company who showcase Indonesian street food: 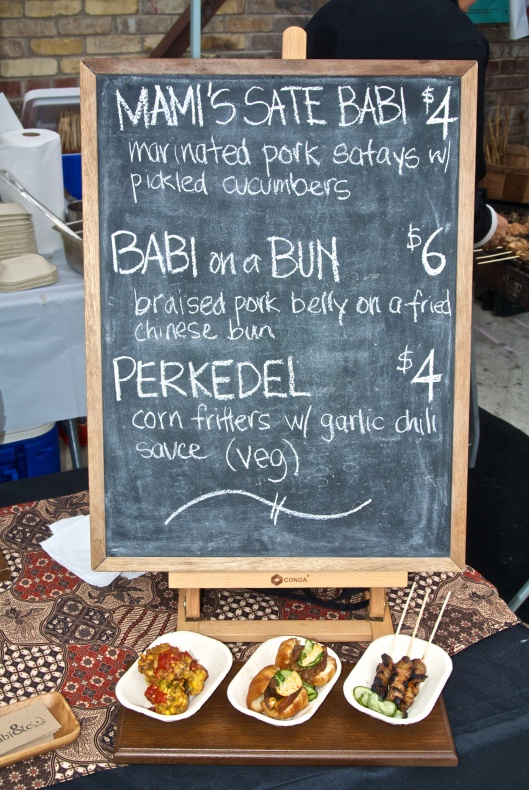 We ordered the Perkedel which were corn fritters with a spicy garlic chili sauce. These were delicious:

Next up we spoke with this gentleman who told us about the different kinds of garlic and offered a tasting of a couple of slices of raw garlic. The first one was Legacy which was mild but still garlicky nonetheless. The next one was Music which had quite a kick and I can still taste it many hours later:

Our favourite tastings came from Kanto by Tita Flips:

They showcase Filipino food and although they do not have a formal restaurant, they operate out of a shipping container at 707 Dundas Avenue West:

We ordered Ukoy which are shrimp fritters and were excellent:

Next was Palabok which are corn starch noodles with shrimp and hard-boiled egg and were equally delicious compared to the Ukoy:

It’s hard to believe that there are so many different varieties of garlic compared to the one type we all see in our local grocery stores: 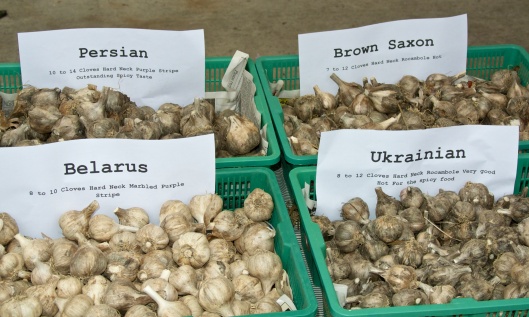 Another celebrity sighting was Tom Harrington from CBC’s Marketplace. He was speaking to people about beef and the massive recall:

I suppose that when you are an independent businessman you will go to any lengths to sell your products including wearing a garlic hat:

This vendor was all about grilled pork products: 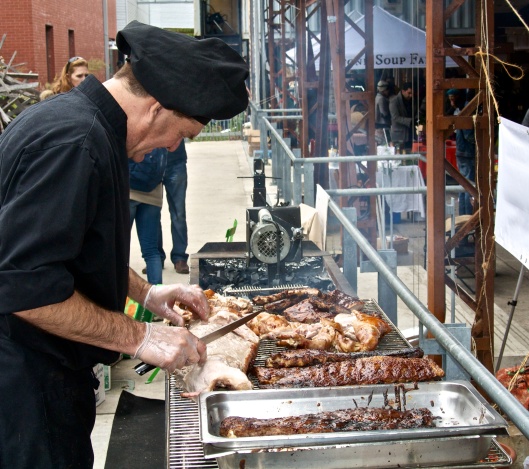 And who can’t resist becoming the Toronto Garlic Festival Super Hero. Yes, that’s me being silly:

Since my wife loves chocolate so much, she couldn’t pass up tasting this Mexican-inspired chocolate drink:

And she couldn’t say no to garlic chocolate ice cream: 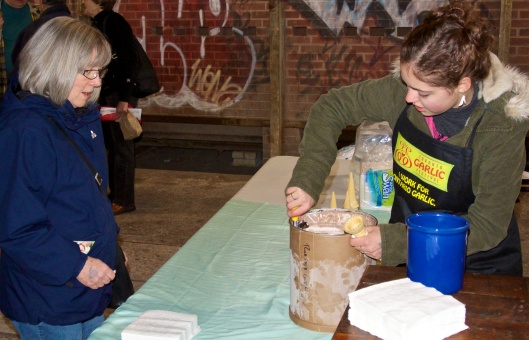 And my last tasting ticket was spent on garlic teriyaki chicken from Shinji Yamaguchi — Gushi Toronto:

We had an enjoyable afternoon at the Toronto Garlic Festival. And kudos to the vendors and farmers who braved the somewhat cool and damp weather we experienced today. This event is a definite must for next year.